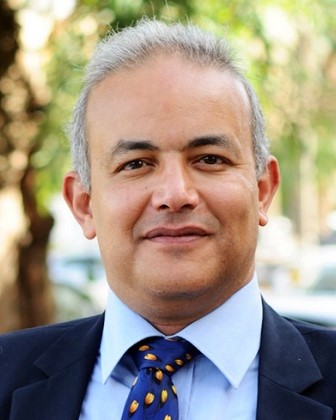 Hazem Shebl is a theatre set and lighting designer. He received his BA in 1989 and Postgraduate Diploma from the Egyptian Academy of Arts in 1992. He was awarded the Egyptian Prestigious Incentive State Award as Best Stage-Designer in 2005 and a Fulbright scholarship in Fine Art (2006-2007).

Hazem has designed the stage set and lighting for over 100 main productions and events in Egyptian private and state-run theatres including, The National Theatre, Cairo opera House, The theatre of the American University in Cairo, Regional Theatres and many others.

He has conducted numerous workshops on theatre design in Egypt.

- Coordinator of The Arab Scenography network. - USITT member since 2001.

- Individual member in OISTAT since 2003, Founder and president of ESTTC – The Egyptian Scenographers and Theatre Technicians, Candidate Centre member of OISTAT since 2012 and he has hosted OISTAT- EC meetings in Cairo May 2012.

Hazem’s set design work has been featured at the Prague International Quadrennial of Scenography (PQ) in 2003, 2011, 2015 and at World Stage Design Gallery Exhibit in Toronto, Canada in 2005 and WSD 2017 in Taipei.