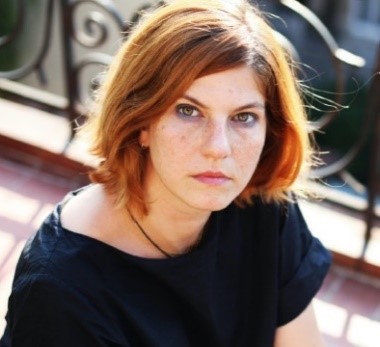 Mia David is an architect, dealing with scene, exhibition, architectural and graphic design, as well as curatorial practices in contemporary visual arts. She is an Associate Professor in Scene Design at the Faculty of Technical Sciences, University of Novi Sad.

She graduated from the Faculty of Architecture in Belgrade and received her MA and PhD degrees in Scene Design at the Centre for Interdisciplinary Studies, University of Arts in Belgrade.
Mia David is the author of numerous projects realised in the field of performing arts, visual arts and architecture, as well as a large number of newspaper articles published in various media. She exhibited and displayed her works in Germany, Austria, France, USA, Russia, Italy, the Czech Republic, Croatia, Bosnia and Herzegovina, Slovenia and in other countries. Within the scope of project SD 02 – Mesto: Krstac (SD 02 – Site: Krstac), she took part in Venice Biennale of Architecture in 2004, and with the Sluga dvaju gospodara (The Servant of Two Masters) and Zimske bašte (Winter Gardens) plays in the Venice Theatre Biennale in 2007 and 2009.

She received several awards in architectural competitions, as well as the awards “Joakim Vujić” for scene design of the play Umetnost i dokolica (Arts and Leisure) and the Special Award of the 6th Biennial of Scene Design for the design of scene, video and promotional materials for the play Pilad (Chicks); both the plays were produced by the National Theatre in Užice. She was a curator and one of the authors of Serbia’s presentation at the Prague Quadrennial in the fields of architecture in 2011. In 2015, as a curator of the National Section, she took part in the performance that won the Gold Medal of the Quadrennial for Provoking a Dialogue. She was a member of the Commission for Architecture of OISTAT and the Chair of the Commission for Architecture of the OISTAT Centre Serbia. Recently, she serves as a national representative and a voting member of OISTAT Education Commission. She was a director of the Cultural Centre of Belgrade. Since 2015, she manages and curates the Navigator Art Gallery in Belgrade.