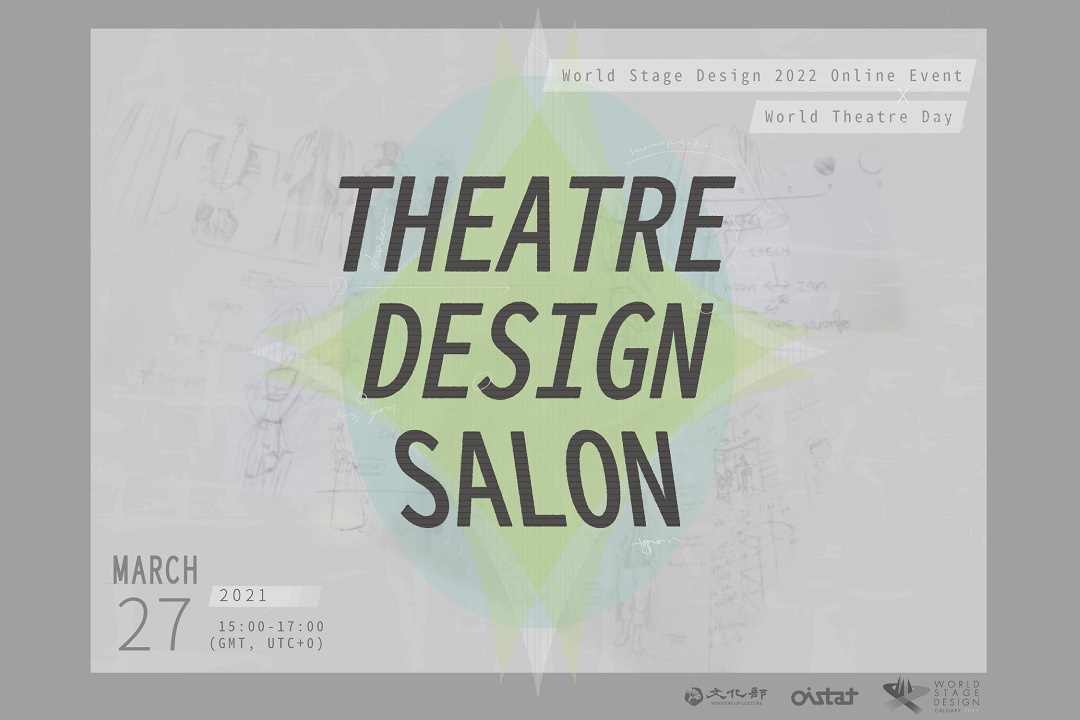 Theatre design is key to engaging audiences. Are you curious about how theatre designers transform a concept into reality? What are the challenges they face in design? How do they adapt creativity to overcoming challenges? Join us to explore what goes on inside theatre designers’ brain.

Please fill out the registration form before March 21.
The confirmation letter with meeting room link will be sent out by March 24.
If you have any questions, please email to events@oistat.org.

What is World Stage Design?

World Stage Design (WSD) is a quadrennial theatre design exhibition and competition for individual designers. WSD is comprised of 4 distinct components that are presented simultaneously:

Ian Garrett is designer, producer, educator, and researcher in the field of sustainability in arts and culture. He is the director of the Centre for Sustainable Practice in the Arts; Associate Professor of Ecological Design for Performance at York University; and Producer for Toasterlab. He maintains a design practice focused on ecology, technology and scenography. Through Toasterlab’s Mixed Reality Performance Atelier, recent work includes The Stranger 2.0 with DLT Experience; Groundworks with Rulan Tangen and collaborating artists from Pomo, Wappo, and Ohlone communities; The locative audio project TrailOff with Philadelphia’s Swim Pony; and Transmission (FuturePlay/Edinburgh and Future of Storytelling Festival/New York). Notable projects include the set and energy systems for Zata Omm's Vox:Lumen at the Harbourfront Centre and Crimson Collective’s Ascension, a solar 150’ wide crane at Coachella. With Chantal Bilodeau, he co-directs the Climate Change Theatre Action. His writing includes Arts, the Environment, and Sustainability for Americans for the Arts; The Carbon Footprint of Theatrical Production in Readings in Performance and Ecology, and Theatre is No Place for a Plant in Landing Stages from the Ashden Directory. He serves on the Board of Directors for Associated Designers of Canada. He was the Curator for the US for the 2019 Prague Quadrennial, and is co-chair for World Stage Design 2022 in Calgary.

“I’m committed to art and all its values and illnesses, that’s how I got into theater and while trying to cure those flaws I saw in my journey into Theater I became a scenographer. This way I become the doctor of my art and I can approach and transform the intangible into a visual feast.”

Rodo Guadarrama, born Mexican living in Switzerland has been working as an architect, industrial designer and as a scenographer. This word. Not just focusing in set design, but being a creator of experiences as performance designer, director and set design.

Studied in central St Martins college in London Scenography and moved to Mexico to start his opera designs. In 2011 he got a scholarship in the New National Theater Tokyo to be an apprentice of Shimakawa Toru, there he learned the making of Kabuki, Noh and western opera. He worked in his first award winning show “Narita Airport” presented in NNTT. Earning 2 prizes in Tokyo and Mexico.

Next year he founded OKUBO STUDIO , a collaborative design atelier.  2 years later he moved to Zürich to MA interaction design and scenography. He made an autobiography show called  3 CATASTROPHES I HAPPILY SURVIVED, Presented in Zurich and in western Europe. He won 3 first prizes in Turin, Belgrade and Zurich and won Best Performance design in the world stage design Taiwan.

He founded the group Nucleus Collective in Zurich which is a collaborative theater company with no director. He produced “Kernschmelze” in 2019 with 2 first prizes and “Extinction Lamento” in 2020 which is in standby.

Tao Chiang is a musician and theatre sound designer based in Taipei. After studying theatre at National Taiwan University, he went on to play in various alternative bands, whilst composing and designing a variety of work for theatre and film. His soundtrack for the short film Summer Skirts received the Golden Harvest award for Best Music in 2012. Aside from composing and designing, he has also created a number of interdisciplinary works which explore the interaction between music and live theatre, including Performance - at Nanhai Gallery in 2012 and Your favorite half-light; your favorite consciousness which was performed at Macau Fringe Festival and WSD 2013 in Cardiff.

Since 2007, he has worked closely with Against-Again Troupe, collaborating and co-creating a number of sound/music-based theater pieces – a direction of theatre-making the troupe has since been known for. These include Gotterdamerung, which was awarded the Gold Medal for sound design at WSD 2017; Dictionary of Chaos: Addendum, which participated in the Site-Specific Performance Festival at PQ 2019; and Ming Bai Ge, winner of the Taishin Arts Award Grand Prize in 2019.

He has also been working closely along with scenographer Yen-ting Tseng in creating intimate no-actor performances and installations centered on sounds and objects. They explored this field during artist residencies in Reykjavik, Iceland and Bristol, UK, where they developed the pieces HULDUR (2014) and The No-Place (2018) respectively. In 2019 they founded Uncertain Studio to continue exploring the possibilities of this concept.

Polish stage, costume and light designer.
She has created various stage designs for numerously theatrical scenes in Poland and Europe.

In 2011, she curated and created the exhibition design and concept for the Polish National Exhibition on the Prague Quadrennial of Performance Design and Space 2011 (together with Ewa Machnio). The exposition was also exhibited in the Polish Center of Scenography in Katowice (2011).

In 2015, she was awarded a Golden Mask prize for the best set design for: Queen Margot.

In 2017 she participated in World Stage Design (WSD) exhibition in Taipei in Taiwan, where she presented two works: Antony and Cleopatra and The Leper. A melodrama.
She won a golden medal in performance design category for the work The leper. A Melodrama.

In her designs she is interested in the symbiotic relation between an actor and the designed space. Despite of this, both elements exist separately whereas the actor’s body fills up the space, develops its character and gives it a new meaning.  Everything what demonstrates human nature is the main subject of Agata Skwarczyńska’s work, therefore, various forms that exist in the environment are very inspiring for her as they form the natural background of human life. She designs objects such as sculptures and installations. The use of fabrics plays an important role in her artistic activities and is present in almost all her projects. She’s experience in doing traditional weaving and ply-split braiding. In 2016, she was a textile artist in residency in Craft Village, New Delhi, India.
www.agataskwarczynska.pl