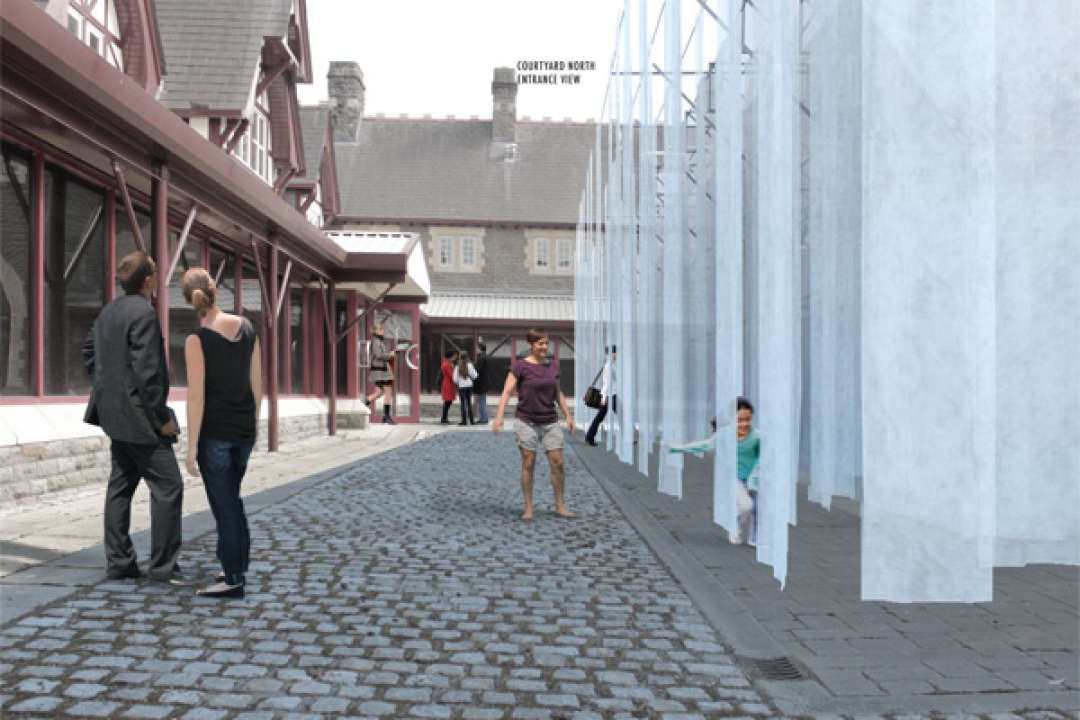 July 9, 2013
A fully-functioning theatre made entirely from locally-sourced re-usable or recyclable materials will go up in the grounds of the Royal Welsh College of Music & Drama (RWCMD) in Cardiff this September as part of the first UK-hosted edition of World Stage Design.

Local and international volunteers will be given just over a week to build the temporary venue in time for it to host a series of talks, workshops, debates and shows exploring environmental sustainability and the arts during World Stage Design 2013 (WSD2013) which runs from September 5 to 15.

The building team will be working to plans by architect Tim Lai and theatre designer Brad Steinmetz, both of Columbus, Ohio, USA – the winners of an international design challenge that attracted more than 100 entries from 26 countries.

Unveiling the plans in Cardiff Ian Evans, WSD2013’s technical director and a senior lecturer at RWCMD, said: “The design brief was a tough one. We asked for a venue that was eco-conscious, could seat up to 150 people, host a variety of events and be self-built, all for an outlay of less than £20,000. Yet the response has been magnificent, many using highly original approaches and suggesting a wide variety of materials, including hay bales, cardboard boxes and packing crates. The entry from Brad and Tim was everyone’s favourite, though, because as well as meeting the technical brief, it is going to look and feel very interesting – an innovative blueprint that can be copied for other settings.”

Wales’ Minister for the Economy, Science and Transport, Edwina Hart, said: “I’d like to congratulate the team at World Stage Design for the innovative idea of demonstrating how a fully functional theatre can be constructed with minimum impact on the environment. Wales’ national waste strategy, Towards Zero Waste, shows the importance of changing our wasteful ways urgently. We need to harness the value of all of Wales’s recycled material in order to limit its environmental impact and strengthen our economy.”

Tim Lai and Brad Steinmetz are calling their structure the Willow Theatre because its exterior features dangling fronds of fabric which shelter and sway like the branches of a weeping willow tree. The building’s strength will come from hired and returnable industrial scaffolding while the decorative fronds and interior walls will be made from UK-produced horticultural fleece, a re-usable material which can also be recycled to make more of the same fabric.

Internal fittings, including the floor and wooden seating will also be re-usable, recyclable and/or re claimed and the roof will be retractable to take advantage of natural light and ventilation.

On hearing of the Willow Theatre’s selection, Brad Steinmetz said he was ‘proud and honoured’ at the decision yet also ‘astonished’ as the WSD2013 project was the first on which he and Tim Lai had collaborated. “Although I knew his work, Tim and I had never met before. But I was very interested in working with people outside of my field so I contacted Tim out of the blue and he was very gracious and open to the idea of working together.”

He added that the design ideas grew out of his past experiences of using horticultural fleece in his set work for low-budget theatre production. “Although I was first drawn to the material as a cheap alternative to large theatrical fabrics, I soon learned that its unique lightness and translucency could be used to great effect.”

The drawings produced by the two men will be on display in the space throughout WSD2013, alongside other shortlisted entries. The arts and sustainability programme will also include performances by Julies Bicycle, Arcola Theatre and Puppet State Theatre and a series of seminars, talks and workshops curated by Ian Garrett, the assistant professor of sustainable practice in the arts at York University, Canada. Other WSD2013 attractions will include a free exhibition of set, costume, props, lighting and sound work by 100 performance designers; hands-on creativity events, over 30 performances including dance, physical theatre, interactive performances and site specific works, and a wide range of master-classes, talks and workshops.

WSD2013 is being hosted by the RWCMD and is supported by the Welsh Government, OISTAT (the International Organisation for Scenographers, Theatre Architects and Technicians), the Ministry of Culture Taiwan and the Society of British Theatre Designers.